As part of our colleague, artist Jeanette Doyle’s, wonderful current exhibition ‘From A to Z & Back Again’  @ac.institute , in New York, the Aesthetics Group performed a new piece of work From A to Z and Back Again which was a response to Doyle’s work. The work continues the groups research which interrogates the aesthetics of language and politics in the digital age. By responding to Doyle’s  set of treated digital prints, which referenced each letter of the alphabet, the performance offered a playful critique of the contested nature of words and their constituents. It attempts to play between the relation of  the immaterial and the de-materialized nature of words and image, their analogue and digital registers. 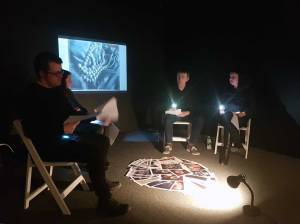 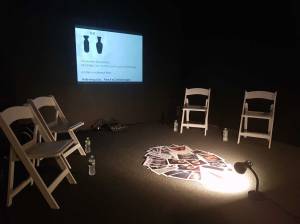 The Aesthetics Group performing ‘From A to Z and Back Again,

In Response to Bernard Stiegler